Update to ‘Social Inclusion and the Legal System: Public Interest Law in Ireland’ (2nd ed) May 2020 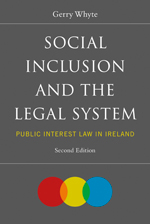 Update to Social Inclusion and the Legal System: Public Interest Law in Ireland (2nd ed), covering Irish material up to 22 May 2020.