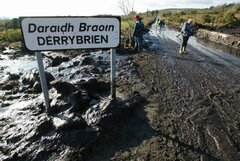 Minister for Housing Darragh O’Brien revealed this week that Ireland is continuing to pay fines to the EU amounting to €15,000 per day in relation to the absence of an Environmental Impact Assessment for the Derrybrien Windfarm in Co Galway. The site was the location of a substantial landslide in 2003.

The EU imposed an initial penalty of €5 million in November 2019 with an additional €15,000 per day thereafter until the state achieves compliance through the submission of a retrospective Environmental Impact Assessment for the wind farm. Derrybrien Wind farm is owned and operated by a subsidiary of ESB.

Furthermore, the European Commission has indicated that a further series of infringement proceeded against Ireland may be on the way which observers say could lead to similar, ongoing fines for environmental and procedural failings and breaches of EU Directives. These infringements related to failures under the Drinking Water Directive; the Common Fisheries Policy; free movement of services and the regulation of professions; the storage of radioactive waste and regulations relating to combatting money laundering.

Detailing the latest actions against Ireland the Commission said it would now:

Reasoned opinions and referrals to the Court of Justice may in the absence of remedial action by Ireland, lead to decisions against the state in the EU Court of Justice and the imposition of lump sum and daily fines.

Commenting on the array of cases either being investigated by the Commission or referred to the EU Court of Justice, Social Demoncrats TD Jennifer Whitmore said the Government does not seem to be able to find the money for environmental infrastructure to ensure compliance with EU regulations “but can always find the money to pay fines”.

She said the fines in relation to Derrybrien would probably amount to about half the annual budget of the National Parks and Wildlife Service, before the issue was resolved.

“It is a shame that right across the State, in the midst of a biodiversity crises, we can not afford biodiversity officers. But we can afford the fines”.

“We really need to spend this money on environmental infrastructure, not fines," she said.