New regulations have given legal protection to basking sharks, marking a huge step forward in conserving the globally threatened species.

Since 3rd October 2022, basking sharks in Irish waters are legally protected under Section 23 of Ireland’s Wildlife Act (the Act). Under the Act, it is now an offence to hunt or injure them, unless done so under permission or licence granted by the Department of Agriculture, Food and the Marine. It is also an offence to wilfully interfere with, or destroy, the breeding or resting places of such species.

The basking shark is a globally-threatened species, which faces a high risk of extinction. Basking sharks are one of the largest species of the shark family. They are the second largest species of any fish, reaching sizes in excess of ten metres and weighing several tonnes. Each year, between May and October, they visit Irish & UK waters.

Minister of State for Heritage & Electoral Reform, Malcolm Noonan and Minister for Agriculture, Food and the Marine, Charlie McConalogue made the announcement. The Department of Housing, Local Government and Heritage said the new law would ensure accordance with, and strong awareness of, best practice for those observing such species.

Minister Noonan said that the strengthening of the protections show that Ireland will, "play its part in offering improved protection to an endangered species that depends on our territorial waters to survive and flourish…We are living in an age of mass extinction…There is an urgent responsibility on all of us to do everything we can to reverse that trend,”.

Aoife O’Mahony, Fair Seas campaign manager who has worked campaigning for this legislation said, ‘It is such a special moment to see a basking shark up close, it is something people remember for the rest of their lives. However, we must also remember these enormous fish are ‘wildlife’ and need to be treated with respect. The legal protection for these animals announced today is such good news and fundamental to their long-term conservation in Ireland. This is another step in the right direction to conserve and protect our marine habitats and species, the next step of finalising Marine Protected Areas legislation this year will help build on successes like today’s announcement.”

Dr Donal Griffin, Irish Basking Shark Group (IBSG) co-coordinator & Fair Seas marine policy officer said, “Given that basking sharks are classified as ‘endangered’, this is a huge step forward in ensuring Ireland remains a place worth visiting for these animals in the future. Yet we can do even more to make sure basking sharks thrive in Irish waters. Ireland has committed to protecting 30% of its seas by 2030, and along with many other nationally and globally important marine species, the basking shark must be a key consideration in Ireland’s future Marine Protected Area network.” 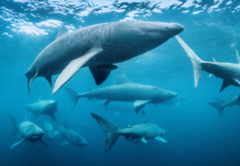